Film / The Prophecy 3: The Ascent 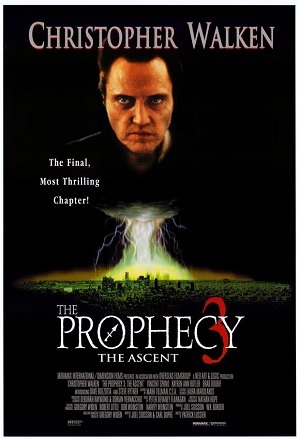 The Prophecy 3: The Ascent (2000) is the second sequel to The Prophecy. The third film is the last one to star Christopher Walken.

About twenty years after the second film, Danyael Rosales (Dave Buzzotta), the Nephilim conceived by Danyael and Valerie in the second film, is preaching to a crowd about how God doesn't exist. He is shot dead by a blind attendee (Brad Dourif), only to later come back to life. Danyael then learns of his true heritage and his destiny to end the War in Heaven, and sets out to stop Pyriel (Scott Cleverdon), the Angel of Genocide. He is aided in his mission by a reformed Gabriel while being hunted by Zophael (Vincent Spano), an angel who takes Danyael's girlfriend Maggie (Karyn Ann Butler) captive and deceives her into thinking that Danyael came back wrong.