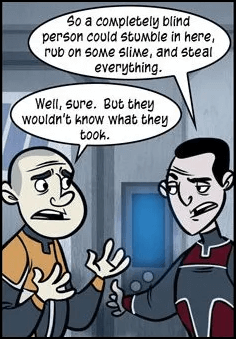 typical video game security.
Dr. McNinja: I don't know why the mayor would refuse to speak to me.
Secretary: He's not refusing to speak to you, sir. He's just out.
Dr. McNinja: He knows I can just appear in his office whenever I want. Your security means nothing to me.
— The Adventures of Dr. McNinja
Advertisement:

Characters can enter the premises of a certain facility whenever the plot necessitates it, despite presumably locked doors or obvious obstacles. Any trouble they should logically run into seems to be deliberately not shown. Sometimes this is just a matter of not having enough money for a transitional set.

Expect The Guards Must Be Crazy trope for some of these places. If the character has already broken in when the owner returns, it overlaps with Trespassing to Talk.

If the facility in question actually does have good security but is easily breached anyways, it may be a case of Dungeon Bypass.

Alternative Title(s): No Locked Doors And No Guards