Fanfic / A Frog in Arkham Asylum 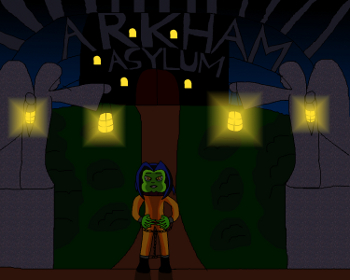 A Frog in Arkham Asylum

is a Jackie Chan Adventures and Batman: Arkham Asylum Crossover fanfiction by chaotic9

, and a part of Project Dark Jade. The author has another Project fic as well, titled Kage, a crossover with W.I.T.C.H..

Basically, Jade gets stuck with the froglike appearance of the Wind Demon, is framed for the murder of her family, and is sent to Arkham, where the fight for her sanity has begun.

Official Description: Being stuck as a half frog was bad enough. But to be framed for her family murders is even worse . Locked up in the craziest place on the planet and stuck in the middle of the Dark Knight clash against his insane nemesis, Jade Chan will have to fight to keep her sanity in the one place where she can lose it. Welcome to hell on Earth and enjoy your stay.