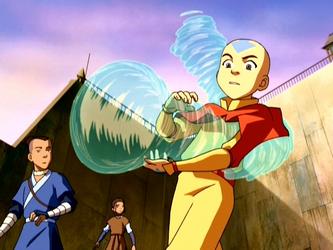 All the windmills fear my might!
"Winds, guard me!"
— Xaldin, Kingdom Hearts II
Advertisement:

Elemental Power, mainly dealing with air or wind (and thus a Sub-Trope). It doesn't always mean Razor Wind, but includes the power to manipulate winds, such as literally blowing the enemy away, creating tornadoes, or used as a free Flight power. Any character who uses this is almost guaranteed to land in the role of a Fragile Speedster. Sometimes, this power is a natural extension for those with Super Speed, usually running around in circles very quickly to create a tornado. Wind users tend to be cheerful, free-spirited types. If The Hero uses wind powers, then The Lancer will often use fire. When combined with earth, it can create a sandstorm; with water, it can form a mist or regular storm; and with fire comes lightning. The very lucky may have this as merely a subset of Weather Manipulation.

May overlap with (or be the in-universe justification of) ash or sound powers and deadly music. Often green, yellow, blue, purple, white or pastel. Wind from Beneath My Wings is a Subtrope. Healing Winds is another that specifically focuses on using winds to heal. Super Breath is another stock superpower that can produce similar effects. In a Four-Temperament Ensemble, unless a Power Stereotype Flip is in effect, expect this character to be Sanguine. May also appear as part of Fire, Water, Wind.

Not to be confused with Blown Across the Room or other Guns and Gunplay Tropes.