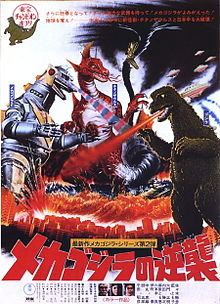 "Even if you're a cyborg, Katsura, I still love you!"
— Akira Ichinose
Advertisement:

The final film of the original series, also known as the Showa Era of the Godzilla series (while Destroy All Monsters is the last film chronologically), and directly taking place after the previous year's Godzilla vs. Mechagodzilla. It is the final Godzilla film directed by the legendary Ishir⁠ō Honda, and is called Mekagojira no Gyakushū (Mechagodzilla's Counterattack) in Japan. Also went under the title "The Terror Of Godzilla" in it's initial U.S release.

The movie was not well received when it was released, and Toho would not produce another Godzilla movie until the king's 30th anniversary in 1984 due to an energy crisis. The film was one of only two Godzilla films to have less than a million tickets sold. It would remain the least successful Godzilla film until Godzilla: Final Wars in 2004. The music was composed by Akira Ifukube, and the special effects were directed by Teruyoshi Nakano. The film was produced by Tomoyuki Tanaka.