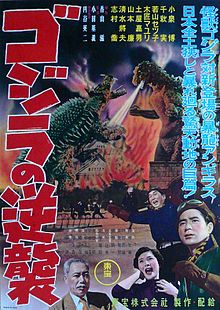 Godzilla's back, and he's not alone...
"The hydrogen bomb tests awakened Godzilla, and now, they have awakened an ankylosaurus."
— Dr. Tadokoro, during the emergency conference.
Advertisement:

Also known as Gojira no Gyakushu (Godzilla's Counterattack) is the first sequel in the Godzilla franchise and the second entry in the Showa era, Godzilla Raids Again was made soon after the success of Godzilla (1954). It's notable for introducing the monster Anguirus and the tradition of always having Godzilla fight another foe. The last black-and-white film and it kept with the grim tone of the previous film.

The film was dubbed as Gigantis, the Fire Monster, which did things like give Godzilla Anguirus' roar in order to convince audiences this wasn't a Godzilla sequel (no, really), because Paul Schreibman, who distributed the film through Warner Brothers, believed that a stand alone film would be more successful. The dub was notable for having George Takei, Marvin Miller, and Keye Luke among the cast, but it wasn't well received and Schreibman himself later lamented his decision. Depending on your point of view, it's either an embarrassment or comedy gold.

Searching for schools of fish for the Kaiyo Fishing Company, Koji Kobayashi's plane malfunctions and he has to make an emergency landing near Iwato Island. He is rescued by a coworker, Shoichi Tsukioka, and they are shocked to find Godzilla and a mysterious monster later named Anguirus battling on the island, who fall into the ocean. The pair later give evidence to a committee that includes Dr. Kyohei Yamane, who was present for Godzilla's original attack on Tokyo and advises them to lure Godzilla away with flares while the city in in blackout. Days later, Godzilla appears at Osaka's shore. Everything seems to go to plan as the city goes into blackout and flares lure him away. But a jailbreak gone awry causes a fire that lures Godzilla back to shore. Anguirus soon follows and the pair ignore the military fire as a brutal battle lays destruction across the city. With Anguirus dead and Godzilla victoriously leaving Osaka in ruins, our heroes jump at the chance to fight the King of the Monsters when he shows up near a small icy island. Can Godzilla be defeated, and would it take the sacrifice of one of our heroes for this to be done?

As noted above, originally distributed by Warner Bros. on a double-bill with Teenagers from Outer Space in the states. Guess what else they're distributing...