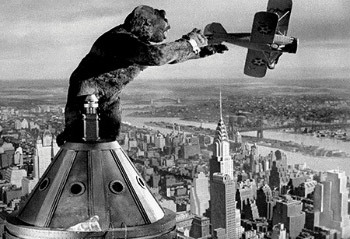 A classic move for the giant-monster genre, from King Kong to Clover, this is when a gigantic creature or similar menace lashes out and destroys a helicopter or other low-flying aircraft. The aircraft might be attacking the monster, circling too close to capture footage of the creature (news crews, beware this trope!), or simply passing by and/or trying to get the hell away from it. One of the many hazards of being an Acrophobic Bird, and a standard tactic for filmmakers to justify a monster not simply being blown away by an air-to-ground missile. Of course if the threat is groundbased, and the pilots would logically know it possessed no ranged weaponry, this may be a case of Too Dumb to Live.

Often overlaps with Hellish Copter. Bonus points if we see someone reporting from the helicopter as it gets swatted, making it Deadline News as well.