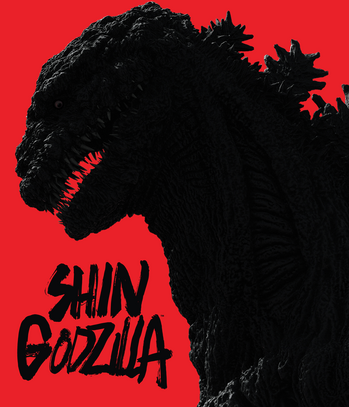 Shin Godzilla (Shin-Gojira in Japan), also known as Godzilla Resurgence in some territories, is a 2016 kaiju tokusatsu film. It's the 31st entry in the Godzilla franchise, the 29th Godzilla film produced by Toho, the first Godzilla movie produced in Japan since Godzilla: Final Wars in 2004, and the first in the Reiwa series. Announced in December 2014 as a Continuity Reboot made in response to the 2014 American Godzilla movie, it was released on July 29, 2016. In March 2015, it was announced that Hideaki Anno of Neon Genesis Evangelion fame and Shinji Higuchi of the Heisei Gamera trilogy would be co-directing, with Anno writing the script and Higuchi in charge of special effects. The music was directed by Shiro Sagisu, also of Evangelion fame. Visual effect duties are handed off to Shirogumi, the studio behind Stand by Me Doraemon.

When the Tokyo Bay Aqua-Line mysteriously floods and collapses, Japan's Deputy Chief Cabinet Secretary, Rando Yaguchi (Hiroki Hasegawa), is convinced that the incident was caused by a living creature, but his claims are shrugged off by Prime Minister Seiji Okouchi (Ren Osugi), who assumes the accident was caused by a natural disaster. However, when an enormous tail surfaces from the Bay, the possibility of a giant monster becomes a reality.

The film's Japanese title is a multiple entendre that can be read as "New Godzilla", "Pure Godzilla", "True Godzilla", or "God Godzilla". The film also stars Yutaka Takenouchi as Hideki Akasaka and Satomi Ishihara as Kayoco Anne Patterson. The film's incarnation of Godzilla uses computer graphics with the ending scene portrayed with a practical tail piece, and takes design cues from the original 1954 film.

Unlike Toho's other Godzilla films, this one ignores the original 1954 film completely, with it being the first time Godzilla appears in Japan

Following the film's release, it received a limited theatrical run in 100 territories worldwide in late 2016, and Funimation dubbed the film

for North America. Funimation also released the film on DVD and Blu-ray on August 1st of 2017.

The film enjoyed immense success in Japan, winning several awards and dominating the box office. However, despite that, it has been confirmed that there won't be a sequel

, though a 4D ride crossing over with Neon Genesis Evangelion, Godzilla vs. Evangelion: The Real 4-D, was created as a temporary attraction at Universal Studios Japan; And Godzilla Intercept Operation, a zipline attraction in the form of a life-size model of Shin Godzilla's head and neck opened at Nijigen no Mori park on Awaji Island in October 2020.