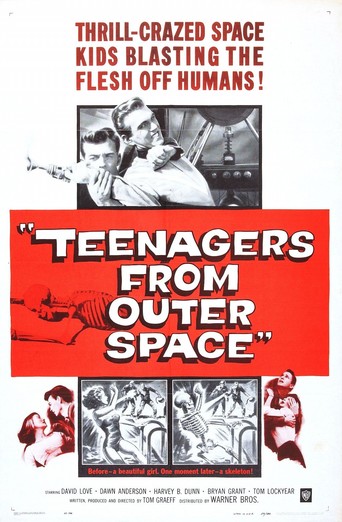 Teenagers from Outer Space is a 1959 Cult Classic B-Movie written, directed and produced by Tom Graeff. A pair of men from outer space land their spaceship on Earth, and they decide that this is the perfect planet to begin a ranch for gargons (i.e. giant lobsters). The idealistic young crew member Derek makes a moral and legal objection when he sees there is already intelligent life on the planet, meaning that by their own laws they can't use this world. Then he makes an armed objection, attempting mutiny; he fails, and has to escape the wrath of his crew (after all, the high court might have sentenced him to... never mind) and flees to a small town nearby. There he meets Betty — the most Fifties girl in that Fifties world. Meanwhile, the brash dog kicker Thor is sent to capture him — alive; it turns out that Derek's secretly the son of "Our Leader", even though family relationships don't really count on the homeworld anymore. Meanwhile, the gargons have grown huge and have to be destroyed.

Shot for $14,000, which, in technical film terms, is no money at all even by '50s standards. It shows. Even so, the film has serious science fiction writing even for now, exploring themes that are still relevant now. Their ideas outstripped their ability to afford to depict them credibly on screen.

Played on a double-bill with Gigantis, the Fire Monster during its theatrical run.

It is public domain and can also be unlocked in the game Destroy All Humans!.

No relation to the Animesque role playing game of the same name.