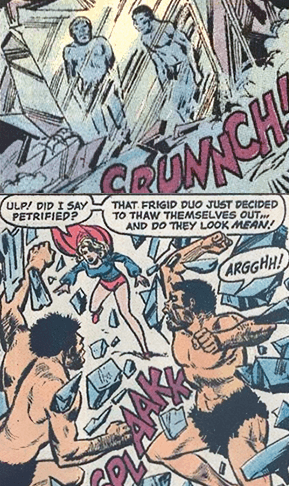 A character is frozen solid by superpowers or some sort of futuristic weapon. This can be in the form of encasing the character in a giant ice cube or simply freezing the person. Then shortly after, they thaw out, and they are mostly unharmed. Sure, they might shiver a bit, but they have absolutely no problems with hypothermia, frostbite, shock, or, with the covered in ice version, suffocation. After all, microwaving frozen food works! And there's all this buzz about "cryogenics,"note Suspended animation via extremely low temperatures is actually called "cryonics"; "cryogenics" is the study of the creation of extremely low temperatures and their effects on materials. which must mean that you can freeze and thaw people out with no problem.

If the character's body itself is frozen, the situation is even more unrealistic. Unless you take special precautions when you freeze organic tissue (which can be assumed to be the case when making human popsicles, especially if Applied Phlebotinum is involved), the water in each cell will freeze and expand — bursting the cells and dealing them mortal wounds (frostbite). When it thaws out, they die and the body's soft tissue turns into mush. There are ways of minimizing ice damage to frozen organic tissue (usually by making sure the water in most cells includes special chemicals that prevent the water from expanding so much when it freezes), though whether it will be of any help to future scientists that try to revive the person is a matter of debate (one of the primary problems with this method is that all known suitable chemicals are extremely toxic).

Even if you avoid the ice crystals, there's the matter of having parts of your body at different states. Freezing is usually portrayed as instantaneous, but thawing is generally done more slowly. This would kill you. Imagine having your extremities full of oxygen-starved blood while your heart is still frozen. Not pretty.

Many Video Games have freeze attacks that trap the player. Usually the player just has to do some Button Mashing to break free and move at full speed/strength. The greater risk is from not being able to dodge instead of hypothermia or suffocation, which is a bit more justified since the character is typically only encased in ice rather than frozen solid and breaks out in a matter of seconds anyway.

Movies may also portray characters as awake while frozen, often by having their eyes open and moving around.

This is commonly employed when a Monster in the Ice appears. More often than not, if the ice is broken or melted away, the trapped monstrosity will prove to be awake, healthy, and fully aware despite having spent ages frozen in a glacier.

This trope is closely related to Exposed to the Elements and Frigid Water Is Harmless. For the lethal inversion of this trope, see Kill It with Ice; for combining the two, see Literally Shattered Lives. Could lead to Harmless Liquefaction if the frozen character is melted along with the ice. For this trope's electrical counterpart, see Harmless Electrocution. For breathing without problems in other hostile environments, see Batman Can Breathe in Space and Super Not-Drowning Skills.

Dolly's 'Winter Funderland' party stops being fun when the cold temperatures start taking its toll on everyone.

Alternative Title(s): I Was Frozen Today

Dolly's 'Winter Funderland' party stops being fun when the cold temperatures start taking its toll on everyone.