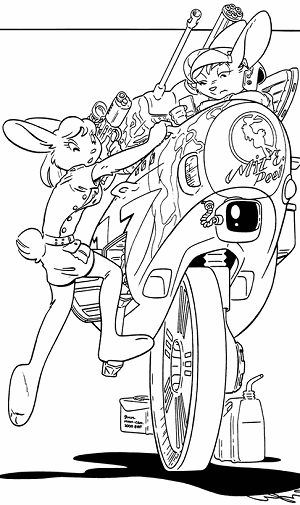 Cycle Tank (slightly cropped). An early piece signed WM. One of the few pictures by Wayne that depict both characters and vehicles with more or less equal prominence.
Advertisement:

Taral Wayne is the working name of Canadian artist and fanzine writer Wayne MacDonald (born 1951). The name Taral comes from his invented language, Siroihin. His earliest work appeared under his real name. He later called himself Taral Wayne MacDonald before dropping the surname completely.

Much of his work comprises images of young women, and occasionally men, sometimes nude and always attractive. Some are human, some furry, and some belong to his invented alien species.

He is equally at home with vehicles, however, being a keen model collector, and several of his pieces depict imaginative cars, aircraft, spacecraft or imaginary transports.

In the 1990s Wayne collaborated with Steve Gallacci (creator/co-writer) on the short-lived Comic Book Tales of Beatrix. The title character is an ordinary rabbit-girl who is resurrected by hyper-intelligent, pan-dimensional beings after becoming collateral damage in a drive-by shooting. The beings give her a suit which confers total invulnerability. Unfortunately, it also makes her "invulnerable" to things like taste, smell and sexual pleasure, and she can't take it off. To make a living Beatrix is forced to become a Super Hero for hire, which involves something of a learning curve in how to exploit her invulnerability.

Wayne's art can be found on DeviantArt here

and FurAffinity (with the username saara) here

Despite having been nominated for Best Fan Artist Hugo Award eleven times he has never won. He did, however, win the 2008 Rotsler Award for contributions to Science Fiction Fandom, and was Fan Guest of Honour at the 2009 Worldcon, Anticipation, in Montreal.

He has an article on Wiki Fur here