Fanfic / The Thief of Light, The Maid of Shadows 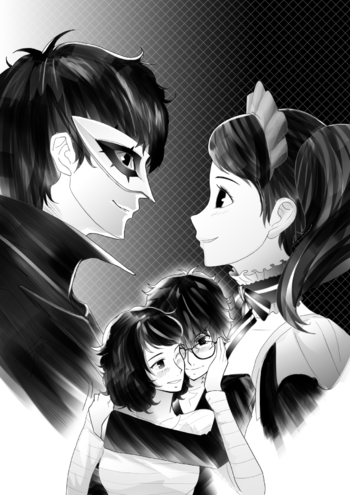 "Sadayo Kawakami wanted nothing to do with Akira Kurusu, her new transfer student. He was a problem child with a criminal record and she simply wished he was taken out of her hands. She had no idea how much her life would change after an accidental encounter with him during her night job, or how important a person he would become in her life, just like she would his."
Synopsis
Advertisement:

The Thief of Light, The Maid of Shadows

is an ongoing Persona 5 fanfic written by Lonely_Support

The fanfic largely follows the canonical events of the game, but almost exclusively from the perspective of Sadayo Kawakami, and focusing largely on her growing relationship with her student, Akira Kurusu. It explores and contextualized much of Kawakami's Confidant route, adding its own flavor by the characterization that Akira is given, and expanding upon it, as well as continuing to explore and expand on the relationship well past the point where the Confidant ends, and how this affects the lives of both Akira and Sadayo, and those they grow close to.

For the most part, it largely overlooks and/or references the more supernatural elements of the video game (Akira's adventures with his comrades as Phantom Thieves), and instead opts to focus more on the mundane but far more relatable struggles of their daily lives, expanding on the protagonists' backgrounds, lives, social circles and families, adding quite the depth to them and making the story that much more immersive.

The fanfic provides examples of: