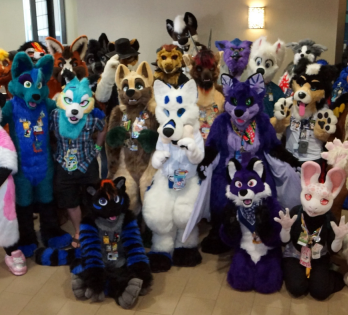 Just a purr-fect flock of doggone friends having a whale of a time.
"Given the choice between an animal with fur and one without fur, most people would think the animal covered in fur would be cuter. And if we applied that logic to people, then everyone would be a furry."
— TheOdd1sOut
Advertisement:

Basically, a furry is a fan of anthropomorphic animal characters (or "anthros", as they commonly abbreviate it to). The majority of the fandom consists of people who enjoy fiction and art revolving around anthropomorphic animal characters, ranging from independently written stories and comic books to established, mainstream franchises, with Sonic the Hedgehog, Teenage Mutant Ninja Turtles, Pokémon, The Lion King, Kung Fu Panda, Animal Crossing, Star Fox and Zootopia being some of the most revered mainstream works.

The start of the furry fandom is a topic of much debate, but it solidified into a place in fiction in the early 1980s, with Albedo: Erma Felna EDF and its related works by Steve Gallacci generally considered the first "furry" comic book. The immediate success of the independently produced Teenage Mutant Ninja Turtles (Mirage) in 1984, as opposed to corporate works by Disney et al, enticed publishers and creators into making more works starring or exclusively featuring anthro characters; this opened the doors for actual furry creators to get their works circulated. As a result, the mid-1980s to early 2000s were the glory years for printed Mature Animal Story comics with independent publishing houses like Thoughts & Images, Fantagraphics Books, Mu Press, Radio Comix and Shanda Fantasy Arts offering whole lines of series for furry fandom. Indeed, Radio Comix's Genus holds the record for the longest running adult erotic comic in North America. Unfortunately, this all ended when Marvel Comics' 1990s attempt to dominate distribution with its in house business of Heroes World backfired, enabling Diamond Distributing to instead gain a practical monopoly over the North America market instead. Diamond steadily strangled the market for small independent publishers by raising its required minimum circulation numbers until most were put out of business, including most of the above publishers. Fortunately, online crowdsourcing services like Kickstarternote for funding towards individual projects and Patreonnote for subscribing towards ongoing projects have arisen to provide a new means to publish for both the field's veterans and new talents.

Written works began to excel during this time as well thanks to fanzines, as well as a growing presence of written and drawn works appearing at science fiction and fantasy conventions. By 1989, furry conventions began appearing, with some (such as Midwest FurFest and the now-discontinued ConFurence) branching off from already established sci-fi and fantasy conventions. Currently, there are over 80 established conventions and gatherings worldwide (with the United States holding seven of the ten largest in the world), countless meetsnote City and even regional meetups. and several websites dedicated exclusively to furry art, literature, and even clothing and accessories.

Most (though not all) furries create what is known as a fursona (a Portmanteau of "furry" and "persona") by which they express themselves or self-actualize, essentially an avatar. Exactly where on the Sliding Scale of Anthropomorphism these characters are vary from extremely cartoony to hyper-realistic; the majority of them tend to be on the anthropomorphic side, though non-anthro fursonas (referred to as "Ferals") are popular, too. The term "Furry" is a bit of a misnomer as characters based on birds (referred to as "Avians"), reptiles (referred to as "Scalies"), amphibians, and even non-tetrapods are also counted under the umbrella term. While originally used as characters in comics and stories, fursonas are now generally created as a means of self-expression. As a result, the furry fandom differs from comic and anime fandoms by its emphasis on pet projects of original work and on commissioned artworks of personal characters, rather than focusing exclusively on published works.

The most visible and well-known part of the furry fandom are fursuits, mascot-style costumes of original characters. Much like cosplay, fursuits are labors of love, and there are many home-grown costume businesses who sell original or commissioned full or partial costumes. A common misconception is that a fursuit is a requirement in the fandom; in reality, roughly a quarter of the fandom are 'suiters.note This is for a reason, as the commissioning of an original fursuit is usually priced around $4,000, while a pre-owned suit goes for around half that price Most (again, not all) simply opt to commission art of their fursonas and original characters. Furries work in several other talents within the fandom: artists, crafters, writers, puppeteers, and most recently, dancers and performance artists, have all found a space within the fandom to share anthro-oriented work.

One often overblown side of the fandom lies in those who produce artwork of an adult nature, including an even smaller subset of erotic cosplayersnote commonly "murrsuiters" but we're not going to go into detail about that. It's this smaller subset that has gotten plenty of attention and vilification. MTV, CSI, ER and Vanity Fair, amongst others, have all had their moments covering this controversial side of the fandom. The effects of this period of mainstream coverage around the Turn of the Millennium are still leaving ripples throughout mainstream discourse of furries: while it is very common now to be outspoken as a nerd, otaku or comic book fan, it is still possible to be ostracized both personally and professionally for being "out" as a furry. The commonly negative portrayals of furries in mainstream media also led to a strict distrust of the media among furries until very recently.

Nevertheless, this "anti-furry" attitude has chilled thanks to both the Law Of Fan Jackassery and to recently changing social attitudes, thanks in no small part to the intermingling of fandoms on social media. For instance, when Midwest FurFest was flooded with chlorine gas in an act of domestic terrorism in 2014, pretty much everyone was outraged, regardless of their opinions on furries as a group. Furthermore, there was a charming incident when a furry convention was held in 2016 at a hotel that was also sheltering Syrian refugees at that time; despite posted warnings for the groups to keep apart, the kids in the latter group were delighted to meet the fursuiters, which seemed to them like the Disney theme park characters had come to them and a good time was held by all. Even better in that same year, Walt Disney Pictures outright marketed openly to the fandom for the promotion of their animated film, Zootopia, and the effort paid off with that film becoming one of the most critically hailed and financially successful films of that year, to say nothing of the other successful furry films that same year, Kung Fu Panda 3 and (to a lesser degree) Sing.

In terms of demographics, there are members of the fandom of nearly all ages, ranging from late teens to mid-twenties, with a smaller but still notable demographic in their late thirties to forties (the fandom's ball really started rolling in the early years of the internet, after all). There are even some older fans, past the age of 45 or 50, who were in the fandom from its earliest networked days in IRC and bulletin boards. These fandom veterans are known as 'greymuzzles' and are often still visible in the community, particularly artists. Nearly all furries have hobbies that extend outside of the fandom: gaming, anime, sports, cars, outdoor exploration... Name it and you'll probably find some furries there, too. There's also a propensity for sarcastic, self-deprecating humor as a reaction to all of the unfortunately biased media coverage of the past decade. There is also a large proponent of furries working in the IT sector, with a common joke being that they quite literally make the internet go. With that said, furries can be found in some curious places—as just a few examples, convention chairman and raconteur Dr. Samuel "Uncle Kage" Conway is a published chemist with a Ph.D. from Dartmouth, while one "Commander Kitsune" is a retired US Navy lieutenant commander, and a semi-anonymous patron known only as "Togepi1125" is a suspiciously well-to-do health care workernote a popular rumor claims that he is a surgeon of some sort, usually a heart surgeon or a neurosurgeon, though he has debunked this several times from Korea. Furries and their fandom are far more widespread than people may realize.note This surprise comes from the tired widespread misconceptions that all furries are NEETs who don't contribute much to society and instead spend their days at home, obsessing over sex, furry webpages, and buy furry merchandise off of their parents' money. When in reality, many furries have successful careers in the STEM and Liberal Arts fields, and ironically can even end up being a furry detractor's boss or superior.

, social psychologist who has created peer-reviewed studies of the fandom since 2006.

All done! Now don't you just have a warm, fuzzy feeling?

While stopping at a Gas Station, the RED Scout is instantly mistaken for his BLU counterpart who is a widely-known Furry.

While stopping at a Gas Station, the RED Scout is instantly mistaken for his BLU counterpart who is a widely-known Furry.