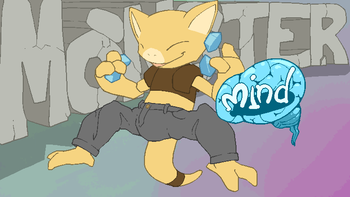 "There's a lot of Pokemon to meet and different things to try, so take your time and have fun with it!"
Advertisement:

Monster Mind is an adult, puzzle-themed Pokémon fan game first released in April 18, 2018 by a Rule 34 artist called ArgonVile. The premise is that an Abra named...well, Abra, has invited the player through a flash game on the internet to test the puzzles they've created for the reward of being able to, ahem, "interact" with them and their friends with a robotic glove.

Gameplay is a spin on the Mastermind board game, starting at the lowest difficulty in which the order of the peg bugs doesn't matter, and then ramping up the difficulties where the exact position must be determined, going from 3-peg, to 4-peg, to 5-peg, and possibly higher. New characters will unlock as the player progresses, and items can be purchased through the game's currency system to affect the gameplay in various ways.

The latest version can be played for free here

on the creator's itch.io page, but fair warning (if it wasn't obvious enough) that it contains NSFW content; 18+ only.