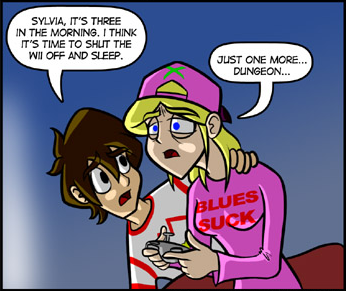 "I started playing Peggle around noon, and emerged from my room sometime later to find that the authorities had declared me legally dead."
— Zero Punctuation reviewing Peggle
Advertisement:

Describe Just One More Level Here, as soon as you beat that boss... Just one more level after that... Now just beat this boss... You just want to fiddle about with the new weapon the boss dropped... Crap, is the sun coming up already?

Basically this is when people stay up way later than they should because they're having so much fun with a game. After all, most games aren't designed to be over quickly, so they encourage long play sessions if the player is interested enough.

Now while this can be an occasional thing, this can be caused by being addicted to a game, and in fiction often is a form of Compressed Vice.

Some games deal with this by Anti Poop-Socking. Some encourage it by restricting saving or, in the worst cases, pausing.

Compare Crack is Cheaper (the hobby equivalent), TV Tropes Will Ruin Your Life (the equivalent for This Very Wiki), Archive Binge, Wiki Walk.

Not to be confused with The Tetris Effect (which is an effect of this trope, not the trope itself).

Now, even though this is Truth in Television, examples are limited to In-Universe, since all but the shortest games can do this in Real Life. There's no point to listing a game that can merely do this.

Also, examples are about games only. Other media are covered by separate tropes.