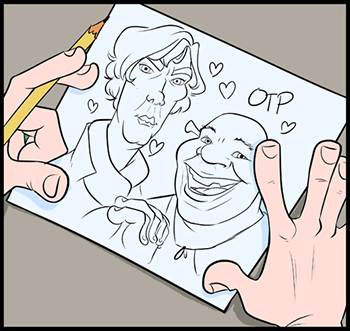 Shipping beyond all bounds of sanity. There are official couples, there are couples drawn from more-or-less subjective subtext, and there are clearly non-canon pairings that still kind of make sense... and then there are pairings that make you go "What?" Characters who are shipped together despite barely even having a relationship in canon. Sometimes they haven't even met in canon. Sometimes they don't even belong to the same 'verse (that's what Crossovers are for, after all) or to the same species. Sometimes they aren't even both carbon-based lifeforms.

Crack pairings range from the making-you-scratch-your-head-in-puzzlement weird, to the gouging-your-own-eyes-out-with-a-fork weird. But they always leave you asking "WHY WOULD ANYBODY THINK THESE TWO BELONGED TOGETHER?!" But interestingly, some fandoms don't have genuine crack pairings — it's true that they end up with Foe Yay Shipping and weirdness, but none of their pairings seem to freak people out. This can be down to a small cast, or any pairing seeming plausible by now.

Reasons for writing crack pairing fan works varies. It might be in order to clean up romantic loose ends by bringing together characters left alone, or to erase the memory of a particularly squicky canon pairing. They might be the result of people genuinely searching for a good personality match, or drawing parallels between two characters for whatever reason. A good number are the results of freeform roleplaying. Perhaps they took it on as a challenge to prove they could make it work. Or maybe they did it on a dare. Most often, though, the insanity itself is its own justification, especially to poke fun at more hardcore fans. It can get worryingly serious though... like they actually believe it could happen...

Occasionally, when a fanfic writer gets hold of a crack pairing and makes it convincing enough, that ship gains a following and can even become very popular. It's even been known to influence The Powers That Be.

While crack pairings may show up in crack fics, the two are not necessarily related. A Crack Pairing could very well be treated in a dead serious and realistic way, just like a Crack Fic can be gen, or only about traditional pairings.

Note that when characters are given some kind of relationship, no matter how unhealthy, insane, or weird their relationship is, it's no longer a true crack pairing. Contrast with Ho Yay, Foe Yay Shipping, No Yay, May–December Romance, Old Man Marrying a Child, Interspecies Romance, Did You Just Romance Cthulhu?, Twincest, Brother–Sister Incest, and even Parental Incest for examples of ships which you may find weird but which are not crack pairings as long as they have basis in canon.

, which needs no further explanation.

If one wants to create his/her own Crack pairing (or just wants to see some pairings that may not yet have been added to this page), use the Brain-Hurting Pairer Generator.

See Crossover Ship for shipping characters who don't belong to the same verse. See Cargo Ship for shipping objects. Compare with Ships That Pass in the Night, which is closely related but isn't quite a subtrope, as it's not at all uncommon for ships that have little basis to be played seriously, due to fans filling in holes or reading into subtext to guess that they'd hit it off. Generally, a Crack Pairing is one that makes no sense even if you assume they do know each other.

Examples should be limited to specific stories, preferably with links, lest the page be overrun with every pairing that has ever crossed anybody's mind.

Warning! There is a strong possibility that you may feel disturbed when reading these examples. Have some Brain Bleach handy, just in case, and don't say we didn't warn you.