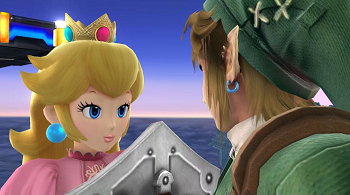 "Link... can I see your Master Sword?"
Advertisement:

Seeing as how Smash is a gigantic crossover of Nintendo's most beloved characters and other gaming icons, this is a given — and, going by the definition of a crackship as a ship between two people who never canonically interact, almost every possible ship in the game would count as this. A good chunk of these pairings are also platonic, parental or simple comradery rather then purely romantic love, especially when a great number of characters aren't even the same species. The following is just a small sample of the more popular ones: