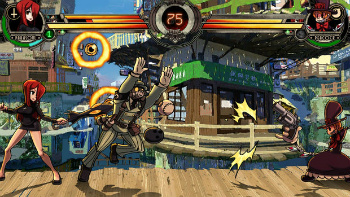 A trope present in many genres but especially in Fighting Games where a non-playable character assists a playable one in some form, usually providing an attack the playable character cannot execute by themself or providing a needed help such as healing, a shield used to tank attacks or another kind of boost.

This is because not all characters are clear-cut for the genre the game belongs to, either because of their Crippling Overspecialization preventing them from having a varied toolset or their power of heart being that lame (even accounting for Competitive Balance) or another issue (technical or not) preventing them from making the playable cut. So the solution to the problem is usually them appearing as part of the moveset of another playable character. The assist appears, does their stuff, and vanishes. After all, even the toughest One-Man Army has to call for backup sometimes. As a result, expect them to be beloved enough by either the fandom or the developers, if what they do is effective enough.

These characters may become Ascended Extras and be ascended to the main roster if the fandom or the developers are sufficiently fond of him/her/it in the game and finally find a way to make them work as playable characters.

Subtrope to Summon Magic. Compare/contrast the Non-Player Companion, who also assists the Player Character but sticks around them the entire time. See also The Cameo and A Boy and His X. Compare Mons and Minion Master, where the entire point is summoning others to fight for you, and Mook Maker and Enemy Summoner for the non-playable versions. One step up from this is for the character to be actually controllable in some way, turning them into the "puppet" part of a Puppet Fighter. Contrast It's Up to You, where you do everything without any kind of help.