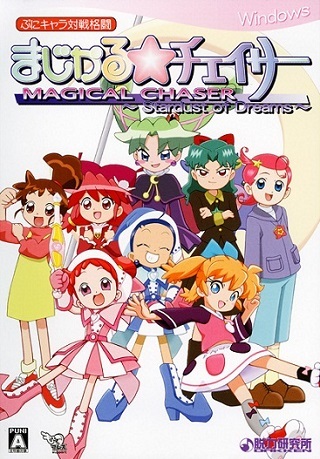 Magical Chaser: Stardust of Dreams is a Doujin Fighting Game made by the Doujin Circle Dakken, as a Crossover of five relatively obscure Cute Witch animes. It was released for PC in 2008, and can be freely downloaded here

The animes it crosses over would be Ojamajo Doremi, Twin Princess of Wonder Planet, Princess Comet, Fushigi Mahou Fan Fan Pharmacy, and Kasumin.

From Ojamajo Doremi, Doremi and Aiko are the payable ones.

From Twin Princess of Wonder Planet, Fine and Bibin are used, the latter of whom can only be played via a special code and serves as the Final Boss.

From Fushigi Mahou Fan Fan Pharmacy, only Potpourri can be played.

Instrumental remixes of themes from all five animes are present, particularly those from Ojamajo Doremi.