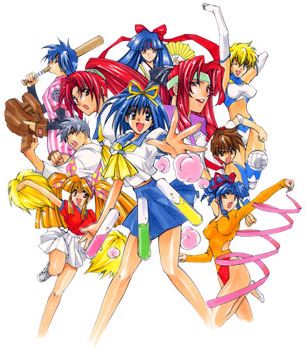 Better fighting through chemistry.
Asuka 120% is a series of fighting games, originally developed by the now-defunct group Fill-In-Café (with the series' final entries being developed by Success Corporation).
Advertisement:

The setting is the prestigious all-girls' school Ryouran Academy (often shortened to "Ranjo"). Every year, during the school's culture festival, a fighting tournament is held, with representatives from each of the school's clubs duking it out to determine what the school's priorities for club funding will be for the next year. Naturally, the more athletically-inclined clubs tend to place higher than the culturally-inclined ones, with the Chemistry Club in particular suffering from a humiliating string of losses in the tournament prelims...

Enter one Asuka Honda, scouted in middle school by the current Chemistry Club president and subjected to a year's worth of Training from Hell in order to be the Chemistry Club's secret weapon. Making it past the prelims, Asuka enters into the final tournament, where she and a host of girls all vying to improve their club's standings will face off.

...And that's about it for the story. Although a multitude of games have been released in the series, they are all retellings of the exact same story, with the major differences being in just how each character's version of it is told.

The official games in the series are, in chronological order:

There also exists a single unofficial entry in the series, Asuka 120% Burning Fest LimitOver, an upgraded version of Limited which was released by former Fill-In-Café employees shortly after the company's dissolution in 1998. The former developers of Asuka 120%, Masatoshi Imaizumi and former Treasure employee Masaki Ukyo, are working at Release Universal Network and went on to develop Phantom Breaker, a spiritual successor to this series.

A character sheet is currently under construction.