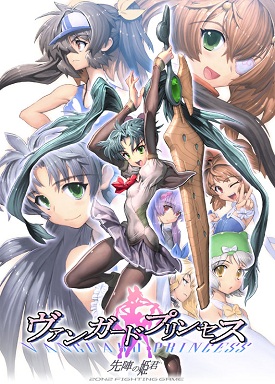 Government experiments on a young girl triggered a cosmic shock wave that gifted many young girls with mystical powers. She re-emerges into the world and vows to destroy all of mankind in an act of revenge. A brave group of girls who embraced their powers head to the battlefield to confront her; not just for the sake of the world, but to pursue their own personal motives and dreams.
—The English version's game description
Advertisement:

A freeware game released on June 26th, 2009, Vanguard Princess is an indie fighting game created by former Capcom employee Sugeno Tomoaki (a.k.a. Suge9) with Enterbrain's Fighter Maker 2002. While the game's entire cast are female, it does not play like a button-masher like most all-girl fighting games, nor is its gameplay is derived from games such as the Guilty Gear series.

Gameplay-wise, the game is more akin to games such as Street Fighter II. However, there is something that makes this fighting game stand out from the rest: It's a "2-on-2 fighting game". At the start of each game, players can chose one of four support characters to help assist them in battle, and the key to this game is experimenting with different support characters to utilize each characters' abilities effectively. Alone, each of the main characters limitations with their potential in battle; but with the aid of their partners, they can they can assist them in certain situations and perform effective combos.

. A complete wiki is available here

It was announced that an English localization

of the game has been licensed by eigoMANGA, a digital manga-publishing company, in 2011. The English version of the game was released in late 2012 via GamersGate and Amazon Downloads for $10. The Xbox LIVE Arcade and PlayStation Networks releases, and availability on other digital distribution services has still yet to be announced, but the Steam version was released in late 2014. In 2018, eigoMANGA went on to publish a series of digital comics based on Vanguard Princess, which can be purchased as DLC for the game.