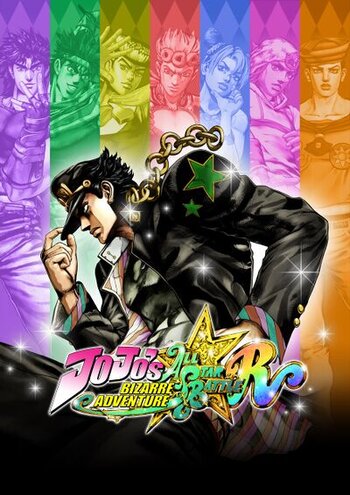 JoJo's Bizarre Adventure: All Star Battle is a fighting game by CyberConnect2 made in conjunction with the 2012 anime based on the manga JoJo's Bizarre Adventure to celebrate the series' 25th anniversary in Japan. The game was released in Japan on 29 August 2013, later getting a surprise western release with Europe getting it first on April 25, 2014, and the US getting it a few days later, on April 29, 2014. The US release is primarily digital, with a limited number of physical copies available. However it also has exclusive features such as Arcade mode and a shortened Campaign mode energy recharge time.

The battle system is what you'd expect from a traditional best-out-of-three fighting game: two characters fight to the last and the first to win two rounds is the winner. All characters have associated command grabs, special attacks, a Practical Taunt that drains a bit of the enemy's Heart Heat Gauge, and two Super Moves: a one-bar Heart Heat Attack and a three-bar Great Heat Attack. Every character also has an associated style, which determines which moves are available to them and how they fight:

In addition, when a character has a quarter of health or less remaining, they enter into a special state:

The game received a sequel in 2015: JoJo's Bizarre Adventure: Eyes of Heaven.

On March 9, 2022, an Updated Re-release called JoJo's Bizarre Adventure: All Star Battle R was announced, and released between September 1 and 2 on the PlayStation 4, PlayStation 5, Xbox One, Xbox Series X|S, Nintendo Switch, and Steam. This version has an expanded cast of fifty-one playable characters at launch (with at least six extra characters being added as DLC), gameplay adjustments, and updated art design and re-recorded voice lines to better match the David Production anime series. The most important gameplay feature is the addition of an Assist Character in the form of one of the playable fighters. These fighters can be summoned a limited amount of times per match, but they can break and extend combos.

Most of the moves and stages highlight important plot points. These can be found in these two pages:

Because of this, beware unmarked spoilers.
Playable characters
Stages
Trailers