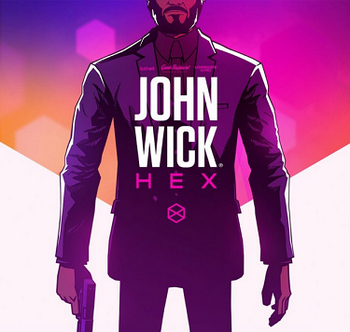 As its title suggests, John Wick Hex is based on the John Wick film series, but it tells its own side story rather than adapting any one of them in particular. It is drawn in a Cel Shaded style, and is developed by Mike Bithell, who had earlier created Thomas Was Alone, Volume and Subsurface Circular.
Advertisement:

was announced in a trailer

on May 8th, 2019, and is slated to be available on consoles, and on Epic Store for PC. It had also demonstrated a gameplay demo

The story starts when Hex, an international criminal mastermind, abducts Winston and Charon of the New York Continental as an act of rebellion against the High Table. Unfortunately for him, a contract is put out by the High Table to retrieve them and John is dispatched to ensure that they come back in one piece. The plot follows John as he sets out to dismantle Hex's criminal network across New York and Switzerland on his way to end Hex's reign and rescue Charon and Winston.