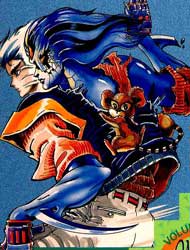 Baoh, also known as Baoh: The Visitor, is a short manga series written and illustrated by none other than Hirohiko Araki, of JoJo's Bizarre Adventure fame. It was serialized in Weekly Shonen Jump from 1984 to 1985.

The story details the adventures of Ikuro Hashizawa and Sumire, a boy and a young girl escaping from the evil secret organization that experimented on them: the Doress/Judas Organization. Ikuro is the host of the titular Baoh, a parasite that can transform him in a murderous killing machine.