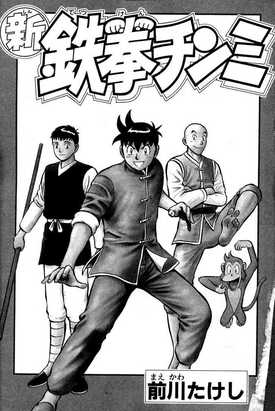 Tekken Chinmi, otherwise known as Ironfist Chinmi or Kung Fu Boy, is a long-running martial arts manga authored by Takeshi Maekawa. It stars the titular young boy Chinmi from a restaurant boy into a grand master, world class martial artist... specifically Kung Fu. And this has no relationship to the Tekken video game series.

Chinmi is a young boy gifted in martial arts, and was prophesized to be a master of martial arts training under Dai Rin Temple, so he is scouted there, trains hard under various trainers in the Temple, and developing as a martial artist with a soul. He's later trained in the arts of rod-fighting and gained a friendly rival named Xu Fang. After his rod-fighting, he's sent to train under Master You Sen about fighting outside training grounds. It was one of his greatest experiences, even though You Sen died due to sickness along the way. Chinmi afterwards traveled the world utilizing his martial arts skills to help people, in a rather episodic format for a manga.

Things took a more serious turn when Chinmi got called back to fight a renegade student of You Sen, Oudow, who completely owned Chinmi in the first run, but eventually defeated using the temple's forbidden technique 'Thunder God' Fist. Since Dai Rin temple runs on Thou Shalt Not Kill, after using that, Chinmi left in Heroic BSoD, thinking Oudow is dead, but Oudow lived, had an epiphany and left in peace. Afterwards, Chinmi is promoted into an instructor in the Dai Rin temple and gained many students.

After a bit of an adventure saving the hometown of his rebellious student Gundi, Chinmi is summoned by the Emperor himself to participate in a tournament, and reunite with Xu Fang... except he's Brainwashed and Crazy by an assassin who plotted to kill the Emperor. Chinmi entered the tournament to save both Xu Fang and the Emperor from the assassination plot, while befriending a kick-based martial arts expert Dan Dan. In the end, Chinmi reigned as champion and managed to fulfill the mission.

The second set of the manga, retitled 'Shin Tekken Chinmi' revolves around when Chinmi is being called to investigate an inactive temple in Ka Nan region, only to find it under the tyrannical rule of King Jirai and his general Boru and lieutenant Soubi. Alongside 'Sword Master' Pushin and former princess-turned rebel leader Hojun, Chinmi set out to free the entire region, culminating in a fatal duel with Boru (and of course Chinmi wins).

This continues in another arc whereas after hearing his deeds in Ka Nan, the Emperor sent Chinmi, along with Xu Fang and Dan Dan to infiltrate the navy after hearing reports about possible dissent.

Then there's another single-arc adventure called 'Tekken Chinmi Legends', in which while traveling the world teaching kung fu, Chinmi and Gundi stumbled upon a plot of kidnapping of a foreign land princess named Mito by a group of bandits.

There is an anime adaptation, but it doesn't go as long as the manga.