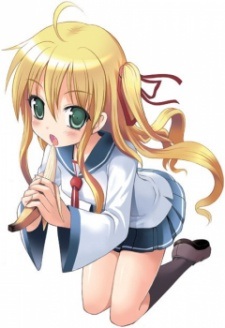 Does This Remind You of Anything?note It's intentional.
Advertisement:

Young Nana and Ringo live in a world where people develop superpowers upon turning sixteen and are expected to use them responsibly to contribute to the communities they live in. Unfortunately, their own powers are on the lowest rung: Ringo has a pair of superhumanly strong legs, while Nana can manipulate bananas. What's more, Ringo's Disappeared Dad has instilled in both of them a deep-seated desire to go adventuring and to find the legendary land of Oz (not that one), where any wish can be granted. Unfortunately, vagrancy is a capital offense all across the continent that deprives adventurers of any human rights, so both Nana and Ringo have been bullied for their dreams since childhood.

One day, the stars align, and Nana and Ringo say goodbye to their home village in the most final way ever (by violently beating up their abusive village chief), and find themselves on the high road of adventure. Wacky hijinks rapidly ensue.

Banana no Nana (lit. "Nana of Banana") was a short-lived comedy action manga by Oniyazu Kakashi, which ran in Comic Blade from 2010 to 2011. Obviously inspired by One Piece (in terms of plot structure) and various Yuri Genre titles (in terms of the leads' relationship), the series released two bound volumes before being axed, leading to a rather rushed ending in the last couple of chapters.