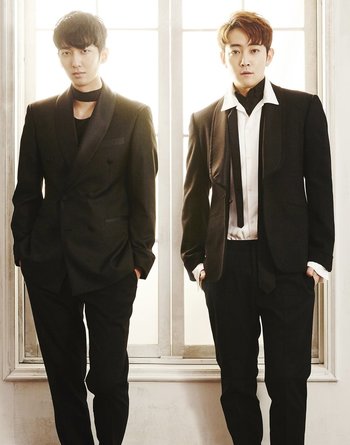 TRAX (formerly The TRAX) is a South Korean rock band formed in 2004 by S.M. Entertainment and were originally produced by Yoshiki. They were often called the Korean Linkin Park and was one of the popular names in the Korean rock industry.

Originally a nu metal/rock band, the group debuted with four members, with the stage names of the members making up the band name (Typhoon, Rose, Attack, Xmas). In 2006, drummer Minwoo left the band, with the remaining members continuing promotions as a trio, with bass guitarist Jungwoo's departure following in the year after. The remaining members Jay and Jungmo then continued as a duo.

In 2018, the group changed its name to TraxX, with DJ and producer GINJO joining the group. It was also announced that their music genre would be changed from rock to EDM.

TraxX provides the examples of the following tropes: