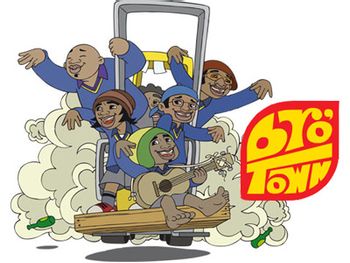 Bro'Town (2004-2009) is New Zealand's first primetime animated series produced by the comedy group "The Naked Samoans", and one that proved to be a wild success throughout the country. Filled with satirical cultural references and hilarious antics, it follows a group of teenagers living in Morningside as they bumble their way through school, puberty and life.

The group consists of Vale and Valea Pepelo, Sensitive Guy and Manly Man brothers; Sione Tapili, who thinks of himself as more popular and intelligent than he actually is; Rodney "Mack" McCorkenstein-Taifule, a soft-spoken and cultured young man who claims to have been raised on the streets but actually lives with adopted parents; and Jeff da Māori, who lives with his mum and eight dads. There are many other characters that flesh out the city, some more prominent than others.

Every episode starts and ends in Heaven with an argument or event ocurring that God, portrayed as a large, white haired Pacific Islander with dreadlocks and wearing a lavalava (Traditonal pacific island male dress), who then tells a story to show the people the error of their ways. Many characters have appeared in Heaven at the start and end an episode such as Jesus (portrayed as a slightly naive teenager), Genghis Khan, Julius Caesar, Mahatma Gandhi, Marie Antoinette and many others.

The series ran for 5 seasons before ending with a total of 36 episodes, finishing in 2009.

As you can see, this page is still very empty, so any contributions would be appreciated!