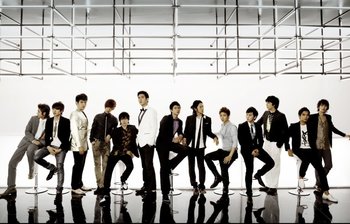 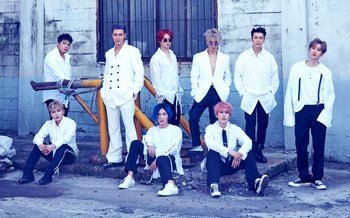 Initially formed by SM Entertainment in 2005 as a rotational twelve member Boy Band named Super Junior '05, Super Junior (Korean: 슈퍼주니어), also known as SJ or SUJU (pronounced shuju), is a popular Korean boy band whose number ranges between seven and fifteen members depending on who you ask.

The twelve-member group debuted with the song Twins, and later promoted the song Miracle which was part of the same album. As promotions for Miracle ended, new members for the next generation, Super Junior 06, were being selected, but the rotational concept was tossed after adding a thirteenth member, Kyuhyun, in 2006.

They're notable for being the first large South Korean idol group, with thirteen members at its peak. The large number allows the group to have a wide range of activities, such as creating sub-units, making forays into acting and hosting on television programs, concerts, and radio shows. All of which are have become common practices in the South Korean popular music industry. However, in October 2009, member Kangin was charged with a DUI and hit-and-run, and in December of the same year, Hankyung filed for contract termination due to unlawful contract provisions. Hankyung left the group permanently, while Kangin returned to the group after his military service, went on hiatus once again in 2016 after another DUI, and later left the group in 2019. Kibum was also inactive in the group's promotions due to his acting activities since 2009, and officially left in 2015. Sungmin, upon the violent reactions towards the announcement of his marriage in 2014, decided not to participate in the group's comeback activities in 2017. Heechul, whose leg was fractured in an accident in 2006, was not able to promote on music shows for the repackaged album REPLAY in 2018 due to the increasing severity of his leg pain, and will also not participate in music shows for the 2018 mini album. Members Zhoumi and Henry were added to the sub-unit Super Junior-M in 2008, but due to the mostly negative reactions from Korean fans, the two were not added to the official Super Junior lineup. Henry decided not to renew his contract with SM Entertainment in 2018 and has announced plans of establishing his own agency, leaving the fate of Super Junior-M unknown.

They're also well-known for the ridiculous amount of fanservice they provide their fans with (but that's nothing new), and the... enthusiasm and possessiveness of said fans. While Super Junior still plays up the Ho Yay, their fans have relatively calmed down in later years.

However, even before Sorry, Sorry, the group was already considered a success in Korea. Their first title song as a thirteen-member group, U, was up for free download on their official website in 2006, and exceeded 400,000 downloads within five hours of release and ultimately surpassed 1.7 million downloads, becoming one of Korea's most popular songs of the year. Their first concert in 2008 was an Asian tour (South Korea, China, Thailand). Sub-unit Super Junior-K.R.Y. became popular for singing in original soundtracks for Korean Drama series. In 2008, Super Junior-T's Rokkugo!!! instantly became a domestic hit, while Super Junior-M's popularity in China instantly rose up after appearing in variety shows.

In 2010, the track BONAMANA was released, and despite not being as popular as Sorry, Sorry, it outsold said album and was at the top of Taiwan's Korean-Japanese music charts for 61 consecutive weeks. Mr. Simple, released in 2012, peaked at number three on the Billboard World Albums Chart and outsold BONAMANA. The group was crowned "Album King" in Taiwan, after both albums ranked 1st and 2nd on both album and music sections of the Korean Music Chart 2012.

The group went into a two-year hiatus starting in 2015 after the release of their special albums Devil and Magic, as five (Shindong, Sungmin, Eunhyuk, Donghae, Siwon) out of eleven active members were to be enlisted in the military, with two (Ryeowook, Kyuhyun) following them in 2016 and 2017. After the five returned from military service, the group came back to the Korean music scene with Black Suit, only featuring seven members due to Kangin's drunk-driving incident and Sungmin's decision to not participate. Siwon was later removed from promotions as the co-CEO of Hanilkwan died due to contracting sepsis after getting bitten by his family dog, but returned for the repackage album promotions. Siwon then returned to promotions for the group's Japanese single On and On, a song which he also co-composed.

In 2018, Super Junior debuted on the Latin Billboard Charts with American singer Leslie Grace & American record-production duo Play-N-Skillz with the trilingual song Lo Siento. This milestone is a first for K-pop acts and marked new territory for the Korean-music scene, leading SM Entertainment to announce that they will expand its market to Latin America. Later on, the song One More Time (Otra Vez) was released as the group's first official Latin title song, this time collaborating with Reik. In the same year, the group was also given the honor of being the last performers at the Asian Games 2018 Closing Ceremony held in Jakarta, Indonesia. In 2019, SM Entertainment announces its joint venture with Indonesia's CT Group, with a Super Junior and Rossa collaboration as its first project.

Member Timeline
Parentheses indicate either the first or last title song which the member participated in during that period.
Sub Units

Attack on the Pin Up Boys 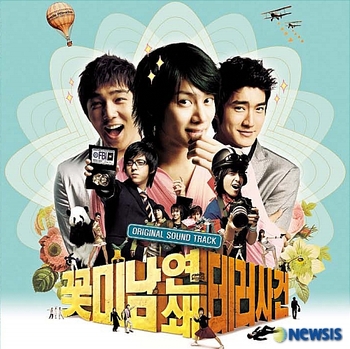 On Valentine's Day, someone tossed a bag of feces to a school flower boy Sungmin. After this, on the 14th day of every month, the same attack happened at different high schools, victimizing basketball player Hankyung and rock star Yesung. However, all boys experienced some sort of popularity after being attacked, leading to other boys wanting to be attacked as well. Kibum predicts that the next attack will hit his high school, Neulparan High School, and sets off to investigate the cause of the attacks. The problem is that Neulparan High School doesn't have just one, but three pretty boy candidates: Siwon, president of the student body; Heechul, president of the dance club; and Kangin, the captain of the Judo Team. Who will be attacked?

The first film produced by SM Pictures, Attack on the Pin-Up Boys (Korean: 꽃미남 연쇄 테러사건; literally Flower Boys' Series of Terror Events), is a South Korean high school mystery/comedy film released in 2007. The film stars every member of Super Junior, except Kyuhyun due to sustaining injuries from a car accident.

Tropes found in the variety shows: 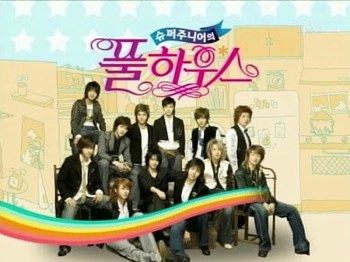 Broadcast in 2006, Super Junior Full House is a reality show presenting the comedic experiences between the members of Super Junior and two female international students Anya and Eva, who did a homestay with the group for a month. The show focused on the Super Junior members learning English and the foreign students learning Korean language and culture.

The show mainly features Heechul, Eunhyuk, Hankyung, Kangin, Donghae, Siwon, and Kibum, though everyone appears in the show (except for Henry and Zhoumi, who were still trainees at the time). 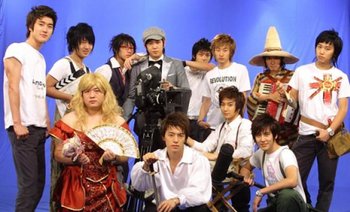 Super Junior Mini Drama is a variety game show hosted by Super Junior. The premise of the show was to let the members write, produce, and star in their own mini drama series. Before each drama episode is filmed, the members will play games to determine which of two teams, Prince Team or Pearl Blue Team, they will be part of. The winning team gets a bonus feature for their drama while the losing team gets a punishment/something embarrassing to add to their drama. Their performances are judged and rated online, and at the end of the series, whichever team gets the most points receives a vacation to Japan.

The show ran for five episodes, with six drama episodes produced based on three different themes:

Explorers of the Human Body

Explorers of the Human Body (Korean: 인체탐험대) is a show that ran from 2007-2008, aiming to answer curious questions about the human body, where the Super Junior members perform the answers by doing experiments with their own bodies. Shin Dongyup was chosen to be the lead MC, with the Super Junior members being regulars and co-MCs of the program. It is also the first and currently the only variety show that included every member of Super Junior as regulars. The show succeeded in attracting a wide audience due to its comedic and educational content. 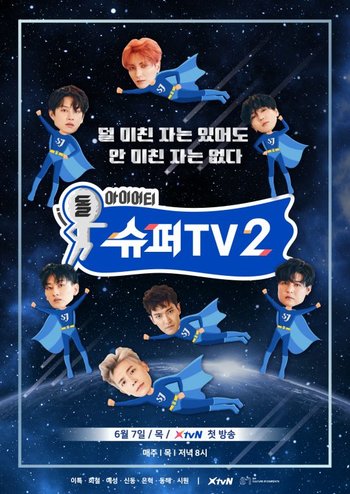 After Eunhyuk's discharge from the army, the group filmed SJ Returns (Korean: 슈주 리턴즈), a reality show showcasing their comeback story for their 8th album, which was to be released in 2017. Despite having nine members, the group only filmed and promoted the album with seven members as Kangin was on hiatus after another drunk-driving incident and Sungmin decided to withdraw from promotions (despite appearing in a short clip). Siwon was later removed from promotions as the co-CEO of Hanilkwan died due to contracting sepsis after getting bitten by his family dog.

The popularity of SJ Returns spawned a TV show titled Super TV, a new concept variety show in which different existing entertainment formats are re-created and twisted in Super Junior's own way. The show featured the six remaining members, with Siwon joining them for the show's second season. The first season included formats such as mukbang, quiz show, movie parody, documentary, talk shows, online broadcasts, sports festivals, and others.

The second season of Super TV introduces the concept of Game of Thrones (Korean: 왕좌의 게임), where other idols challenge Super Junior for the title of "Kings of Variety Show Idols" through playing various games that the members and the guests are good at. If the guests win, they receive a Korean beef set. If Super Junior wins for five consecutive episodes, they get to go on an overseas luxury trip.

The second season of SJ Returns featured the concept of an E.L.F. Diner, where the members go around several restaurants to film an eating show. The show also features the preparations made by D&E for their Japan tour.

The third season of SJ Returns follows the members on their individual activities and their preparations for their new album that will be released on the same year, coined as the 999 Project.