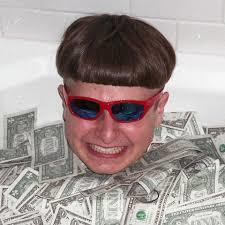 He's not searching for a miracle.
My day will come, I gave too much, I sold my soul, I'm waiting for my pay in full, My only one, your dying love I've seen enough
- Oliver Tree, "Hurt"
Advertisement:

Debuting in 2017 with his viral hit song "When I'm Down", he has reached acclaim for his unique vocals and productions, as well as being a genuinely funny man. Even Thom Yorke approved of him.

And yes, he is aware of the fact he looks like Vector.

Tropes Oliver Tree and his music/music videos have