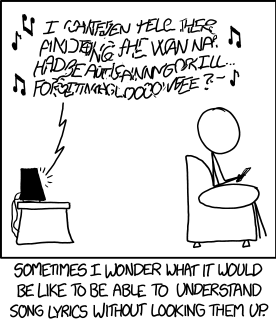 It's unintelligible
I just can't get it through my skull
It's hard to bargle nawdle zouss (???)
With all these marbles in my mouth
— "Weird Al" Yankovic, Smells Like Nirvana

Some songs feature lyrics that appear to be complete gibberish. The listener might sometimes be able to hazard a guess at what's being sung, but such a guess is overwhelmingly unlikely to be anywhere near the mark.

Distinguished from a Mondegreen by the fact that a Mondegreen tends to be sung relatively clearly, but with the listener perceiving word breaks in the wrong place. And distinguished from Word Salad Lyrics because that one features actual words, only not in a way it makes much sense. Often caused by the Perishing Alt-Rock Voice.

The difference between this and Lyrical Shoehorn is that this would be where nonsense isn't intended... it just sort of happened. Maybe the recording sucks. Maybe the singer is singing too fast to be heard clearly. Maybe he was drunk off his ass and thus couldn't pronounce his own name clearly, much less sing coherently. But there is a difference.

The Trope Namer is a round from British Panel Game Never Mind the Buzzcocks, in which contestants are asked to make sense of such lyrics—typically they first come up with a comedic nonsensical version and sing it along, and only then attempt to come up with the actual lyrics.

Compare The Unintelligible and Scatting. If the lyrics are unintelligible except for one line or two, then that's Something Something Leonard Bernstein.