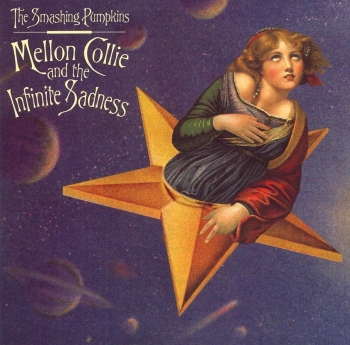 Goodnight, my love, to every hour in every day
Goodnight, always, to all that's pure that's in your heart
Time is never time at all
You can never, ever leave
Without leaving a piece of youth
And our lives are forever changed
We will never be the same
The more you change, the less you feel
Believe
Believe in me
Believe, believe
That life can change, that you're not stuck in vain
We're not the same, we're different
— "Tonight, Tonight"
Advertisement:

Mellon Collie and the Infinite Sadness is the third studio album recorded by American alternative rock band The Smashing Pumpkins, released through Virgin Records on October 24, 1995. Coming off the success of Siamese Dream, the death of Kurt Cobain, the decline of grunge, and the band's experience headlining Lollapalooza '94, frontman Billy Corgan decided to write the album as if it was their last.

The result was a double album produced by Corgan (who described it at one point as "The Wall for Generation X") and famous alt-rock producers Mark "Flood" Ellis and Alan Moulder, with a range of styles including gentle piano ballads ("Mellon Collie and the Infinite Sadness"), aggressive Alternative Metal ("Jellybelly", "Tales of a Scorched Earth", "Fuck You (An Ode to No One)", "X.Y.U."), loud-quiet-loud grunge-ish tracks ("Bullet with Butterfly Wings", "Here Is No Why"), the band's trademark psychedelic, shoegazing-influenced material ("Porcelina of the Vast Oceans"), quiet acoustic tracks ("Thirty-Three", "In the Arms of Sleep", "Lily", "Stumbleine") and more electronic-influenced material ("1979", "Beautiful").

The album debuted at #1 on the Billboard 200 album chart (to date the only Pumpkins album to do so), and was certified Diamond by the RIAA with 5 million copies sold in the United States. It also went Diamond in Canada, Platinum in the United Kingdom, and quadruple-platinum in Australia.note Each disc counts as an album towards certification pretty much anywhere; and vinyl copies counted as three, being a triple-disc album on vinyl. Five singles were released from the album: "Bullet with Butterfly Wings", "1979", "Zero", "Tonight, Tonight", and "Thirty-Three". All would reach the Top 10 on the Billboard US Alternative chart, with four being hits on the Billboard Hot 100 and "1979" becoming the biggest hit of their career, peaking at #1 the Alternative chart and #12 on the Hot 100. The music videos for both "1979" and "Tonight, Tonight" were also big on MTV, with the latter's video winning six Moonmen at the 1996 MTV Video Music Awards, including Video of the Year, and further receiving a Grammy nomination in 1997. Mellon Collie was also nominated for Album of the Year at the 39th Grammy Awards, and "1979" for Record of the Year. However, out of seven nominations, they would ultimately win only Best Hard Rock Performance for "Bullet with Butterfly Wings".

On April 29, 1996, a triple-LP edition was released with a completely different running order and two bonus tracks. It was pressed in limited quantities and is now a collector's item. A 2012 LP pressing, using four LPs this time, used the original CD track order (meaning that the two bonus tracks weren't included). On December 4, 2012, as part of the band's campaign to re-release its entire discography from its original run, the album was reissued in remastered form with three bonus discs, a bonus DVD, and quite a few Feelies. All told, this edition contains 107 tracks, adding up to just under seven hours and ten minutes of music.

Tracks 1-11 of the DVD were recorded at the Brixton Academy in London on May 15, 1996; the last four tracks are from the band's April 7, 1996, performance on the German music television show Rockpalast.

Despite all my rage, I am still just a trope on a page: