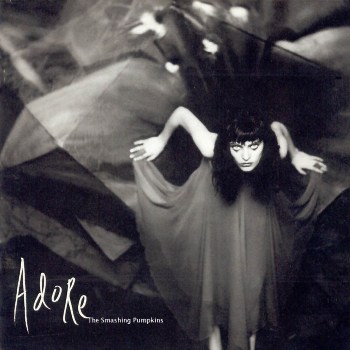 Adore is the fourth official studio album by The Smashing Pumpkins, released around summer 1998.note The exact date depended upon the country, but the earliest release was May 29 in the European Union and the latest was June 2 in the U.S./Canada. The LP edition, which was mono and used a different mix, followed a few months later on August 18. (Amongst other differences, the brief outro "17" was omitted and "For Martha" had a different arrangement that was about a minute shorter.)

After the mass success of Mellon Collie and the Infinite Sadness and a subsequent world tour, Adore was surrounded by considerable hype from the get-go, with MTV going as far as christening it "one of the most anticipated albums of 1998". However, with this level of public expectation combining with a myriad of interpersonal issues, the album's production was marred by problems such that frontman Billy Corgan retrospectively summarized it as "a band falling apart".

These issues were namely the temporary departure of drummer Jimmy Chamberlin due to drug abuse and a number of issues that fell upon frontman Billy Corgan — the recent death of his mother due to cancer, the end of his marriage, and a general sense of musical burnout.

As the band had already experimented outside of their traditional rock sound on Mellon Collie, with the immensely successful electronic-influenced "1979" among other songs to show for it, they decided to hone in on electronica. Hoping to maintain this Progressive Rock-inspired experimentation, Corgan began envisioning a hybrid of folk rock and electronica that was as "ancient" as it was "futuristic". The result was the much more musically subdued approach that Adore was defined by, eschewing their pre-established heavier elements for mellow, ethereal soundscapes taking influence from the likes of industrial rock, gothic rock, synthpop and dream pop, and exhibiting more melancholic lyrics (which Corgan actually wrote before writing the melodies, a first for the band). In a sense, it actually manages to be both Lighter and Softer and Darker and Edgier than the band's other material at the same time.

Adore was regarded as a commercial disappointment compared to their previous two albums, and its vastly new approach divided the band's fanbase while earning universal acclaim from critics. However, its status among fans has risen over the years — something that Corgan predicted himself at the time of its release.

As part of the band's campaign to reissue its discography from its original run, a box set was released in September 2014 containing remasters of the CD and vinyl editions, four CDs' worth of additional bonus content, and a bonus DVD featuring a contemporary live performance in its entirety, totalling to 108 tracks of just over nine hours of music.

The Tropes of Dusty and Pistol Pete: