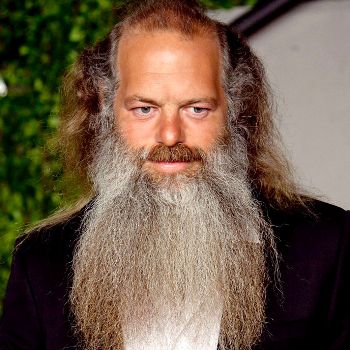 Yeah, you know what you're thinking about.
Advertisement:

Widely considered to be the most influential producer of recent times, at least, Frederick Jay "Rick" Rubin (born March 10, 1963) has risen to prominence for his great assessment of talent and his sharp ear for music. He is described by many artists as a positive influence on their music because he enhances, not converts, the artists' styles.

Ironically, Rubin was not a very popular musician in his early days because he could not play an instrument. He co-founded Def Jam Recordings with Russell Simmons (and plays himself in Krush Groove, a fictionalized retelling of Def Jam's founding), however, and produced records for various up-and-coming hip-hop and rap musicians such as LL Cool J, the Beastie Boys, and Public Enemy. Rubin left Def Jam to eventually create Def American Recordings (The 'def' later dropped when it started appearing in dictionaries), a company that signed many heavy metal acts like Slayer and Alternative Rock bands like The Jesus and Mary Chain. His big break came when he successfully staged a revival for Johnny Cash with his album American Recordings, and he has since signed a variety of big-label artists and up-and-coming debutantes.

In addition to his Genre Roulette, he is noted for his spare, straightforward recording style of directly, clearly recording the musicians he works with and using no audio trickery or effects like reverbnote A stylistic choice that was lampshaded on LL Cool J's Radio (an album consisting mainly of a drum machine, a sample or two and LL), with the credit "Reduced by Rick Rubin". He has kind of moved on to a more elaborate style in recent years, which has come to include string sections and the like.

The albums he produces nowadays are very likely to be squished, though that may be mostly the fault of his sound executives' inanity. One of the more egregious examples would be Red Hot Chili Peppers's Californication, an album that received many complaints from listeners because it was run through a dynamic digital processor after being processed for vinyl- in short, a disaster of epic proportions. In addition, bands such as Slipknot have criticized his hands-off approach to production, and some musicians and engineers have implied that the loudness war tendencies of Rubin's releases are actually his doing. note Amongst the supporting evidence for this would be that when Metallica remastered Death Magnetic in 2016, their version wasn't nearly as badly clipped as the 2008 version he produced, which became a notorious example of the Loudness War; additionally, the 2008 version's mastering engineer, Ted Jensen, said that the mix came to him already clipped, and there was nothing he could do to fix it - indeed, zooming in on the CD waveform suggests that Jensen may have run the album through a high pass filter in an attempt to make the clipping distortion slightly less headache-inducing, meaning that the version sent to him may have been even worse.

Nevertheless, he remains a prolific and well-respected producer. Here is just a selection of the diverse array of artists he has worked with: