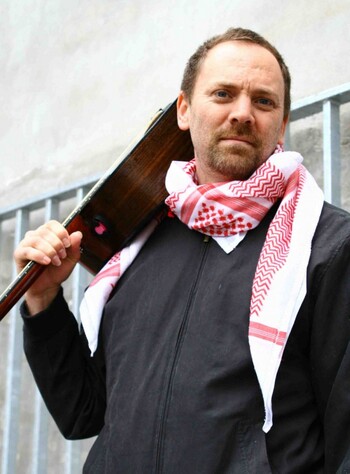 David Rovics (born April 10, 1967) is an American indie singer/songwriter and anarchist. His music concerns topical subjects such as the 2003 Iraq war, anti-globalization, and social justice issues.

David Rovics grew up in a family of classical musicians in Wilton, Connecticut, and became a fan of populist regimes early on. By the early 90’s he was a full-time busker in the Boston subways and by the mid-90’s he was travelling the world as a professional flat-picking rabble-rouser. These days David lives in Portland, Oregon and tours regularly on four continents, playing for audiences large and small at cafes, pubs, universities, churches, union halls and protest rallies.

Tropes associated with David Rovics and his music: