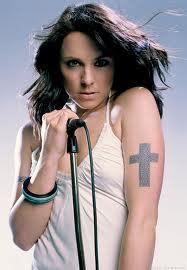 Melanie Jayne Chisholm (born 12 January 1974) is an English singer-songwriter, actress, performer and businesswoman professionally known simply as Melanie C. She got her start in 1994 as one of the five members of the Spice Girls, in which she was nicknamed "Sporty Spice".

She toured the world for years with the Spice Girls. When the Spice Girls broke up, Chisholm produced her own music. In 1999 she made her first studio album, Northern Star, which sold four million copies. After Northern Star, Chisholm had depression and an eating disorder. She recorded her second studio album in 2003, Reason which has sold 500,000 copies, and her third in 2005, Beautiful Intentions with more than one million copies sold. In 2007, she made a fourth, This Time.

In 2007, Chisholm and the other Spice Girls conducted The Return of the Spice Girls World Tour. She then signed for six months to play Mrs Johnstone in the London West End play Blood Brothers. Her fifth album The Sea was in September 2011, and her first ep The Night in May 2012. Her sixth studio album (the seventh including her ep) Stage will be to released in September 2012. She performed with the Spice Girls at the closing ceremony for the 2012 London Olympics.

She has also done some theater work, performing in the musical Blood Brothers as Mrs. Johnstone in 2009 on London's West End and Mary Magdalene in Jesus Christ Superstar in 2012.