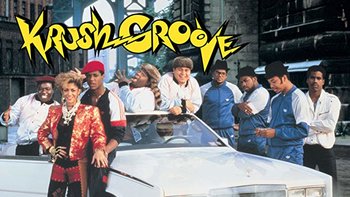 Krush Groove tells a fictionalized version of the founding of Def Jam Recordings, which is called here "Krush Groove Records." Russell Simmons (Blair Underwood) and Rick Rubin are producers for up-and-coming rappers Run–D.M.C. (led by Russell's brother, Run) and Kurtis Blow, but he can't get the financing necessary to develop an independent label. He's forced to get the money from a Loan Shark, with dire consequences.

This movie also tells the story of how The Fat Boys became famous and includes a Sibling Triangle between Russell, Run, and Sheila E.

Despite being Very Loosely Based on a True Story, nearly all the musical characters are played by themselves. Directed by Michael Shultz, who also directed The Last Dragon the same year.