Literature / Kiss of the Spider Woman 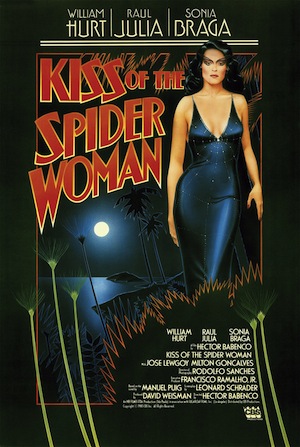 Kiss of the Spider Woman was originally a 1976 novel by gay Argentinian writer Manuel Puig. It was later adapted into a film in 1985 and a musical in 1993. And a 1983 play. But that one isn't as well known.

Set in a Banana Republic (Argentina in the novel and musical, Brazil in the film), the story follows the imprisonment of Luis Molina (William Hurt in the film), a trans woman who was caught corrupting a minor, and political prisoner Valentin Arregui (Raúl Juliá in the film), who is part of a leftist revolutionary group trying to overthrow the military dictatorship and is currently being tortured for information.

Molina passes the time by describing her favorite movies: the most prominent (and the only one featured in the film) being a romance story of star-crossed lovers... that also happens to be a Nazi propaganda film. Naturally, the Film Within a Film is draped with metaphors and symbolism relating to the two characters. It is later revealed that Molina was imprisoned with Valentin to spy on him in the hope that he will open up to Molina, using the film as a way of getting him to talk. Just one problem: Molina has fallen in love with Valentin. Cue moral dilemmas, political statements and gay angst.

Has nothing to do with any of the Spider-Woman characters published by Marvel Comics.

Additionally, the film provides examples of:

And the musical provides examples of: