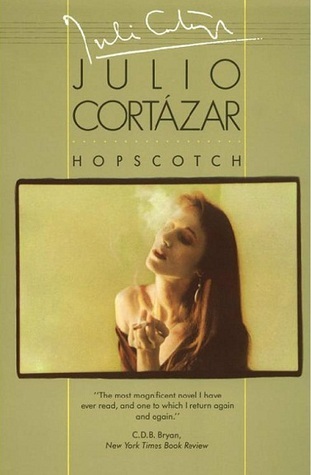 "We went around not looking for each other, knowing we would find each other."

"Hopscotch" (originally titled Rayuela) is not a simple novel. Credited with causing a revolution in Spanish literature by its mere appearance, the novel declares itself to be aimed towards being as un-literature-esque as possible. It easily succeeds on breaking pretty much all "conventions" of this thing called literature.

Hopscotch is meant to be more of an intellectual experience for the reader than a simple "book". It is perfectly possible to read the over a hundred chapters in whichever order you may wish without altering the "logic" of the book and the author himself recommends two different reading orders at the beginning of the book: you can either read all chapters in the conventional, boring numerical order or read them in a seemingly random succession of numbers (from 73 to 1 and so on), which the author helpfully provides in a little chart at the start of the book.

The "main" storyline involves Horacio Oliveira, an Argentine writer and lover of metaphysics living in Paris. Despite (or because of) his immense knowledge, Horacio devotes his time to philosophical acrobatics with the loosely-knit Serpent Club, and wandering around Paris with his Muse, the strange and mysterious La Maga. Interspersed with Horacio's journey to find the absolute are chapters about the author Morelli, whose work a perennial fascination to the Club, yet is troubled by his own literary conundrum. After a series of bizarre events and reflections, Horacio decides to return to Argentina, where he is reunited with his old friend Traveler. There, he begins work first as a circus helper, then in lunatic asylum, all the while sinking into an existential maelstrom.

Really, Hopscotch is a story about journeys. Horacio is constantly searching for something, whether it's the absolute, love, or meaning, while Morelli undergoes his own, parallel literary quest. Tragically, they both realize on some level how they can achieve what they desire, but also that they'll never be able to do so.