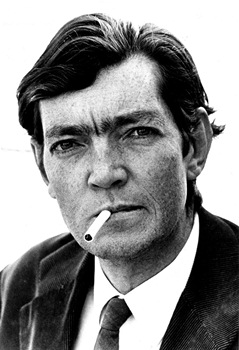 "I realized that searching was my symbol, the emblem of those who go out at night with nothing in mind, the motives of a destroyer of compasses."
"But what is memory if not the language of feeling, a dictionary of faces and days and smells which repeat themselves like the verbs and adjectives in a speech, sneaking in behind the thing itself,into the pure present, making us sad or teaching us vicariously.."
— Julio Cortázar, Hopscotch
Advertisement:

Julio Cortázar (August 26, 1914-February 12, 1984) is an Argentinian writer, famous for being one of the founders of the Latin American Boom. Actually, though he was from Argentina, he spent most of his time outside the country, first because his family lived in Europe (he was born in a Belgium embassy during the German occupation) and later in a self-imposed exile in France because of his dislike of the Peron’s administration. He became a supporter of leftism (including the Sandinista revolution in Nicaragua) and critic of the human rights violations in Latin America. He died in 1984 of leukemia.

His work is amply revered by the Latin American critics and writers, full of Mind Screws around every corner, modernism worthy of James Joyce, wordplay, tracts of stream of consciousness everywhere and bend or just break any convention of literature itself. Some of his most famous works are Rayuela (Hopscotch, 1963), 62, modelo para armar (62: A Model Kit, 1968), Bestiario (1951) and Final del Juego (1956).

Some of his writings (particularly his short stories) have influenced movies, like Weekend of Jean-Luc Godard or Blow Up of Michelangelo Antonioni.

Tropes about him and his worknote except Hopscotch, which has its own page: