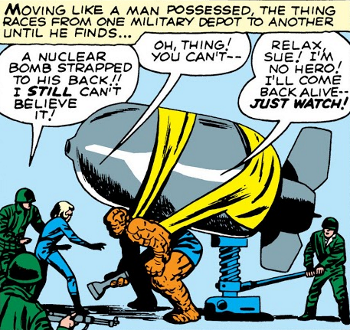 The right tool for the right job.
"I say we take off and nuke the entire site from orbit. It's the only way to be sure."
— Ellen Ripley, Aliens
Advertisement:

When nuclear weapons are used as Deus ex Machina. Such applications are often contrived and approach the arbitrariness of Green Rocks.

The most interesting dramatic element of Deus Ex Nukina is the common requirement that the nuclear device must be delivered by hand. Robots and missiles can't be trusted; nukes are delivered by men. The delivery method is half the fun and often involves physical contact with the device. Frequently, the courier must also make the ultimate sacrifice and stay with the bomb to trigger it manually.

For nukes used as the Plan A of the evil military, see Nuke 'em. For nukes used when the consequences of not using them would be worse, see Nuclear Option.