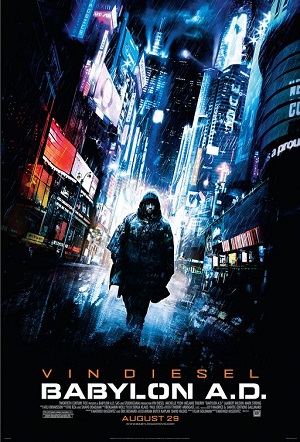 "Save the planet. Whenever I've read that bumper sticker I've had to laugh. Save the planet. What for? And from what, from ourselves? Life's simple: kill or be killed. Don't get involved, and always finish the job. A survivor's code, my code. And it all sounds great until the day you find yourself confronted by a choice. A choice to make a difference, to help someone — or to walk away and save yourself. I learnt something that day: you can't always walk away. Too bad it was the day I died."
— Toorop's opening narration
Advertisement:

Babylon A.D. is a 2008 Cyberpunk action film based on the novel Babylon Babies by French (naturalised Canadian) sci-fi writer Maurice G. Dantec and directed by Mathieu Kassovitz. In a near-future world divided by nationalistic and religious conflict, a mercenary called Toorop (played by Vin Diesel) is hired by a Russian mobster to escort a woman to North America for delivery to the Neolites, a New Age sect.

The film's notoriously Troubled Production was detailed in the documentary Fucking Kassovitz.