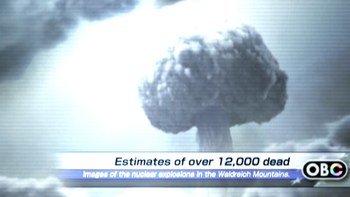 War has changed...note But in the end, war never changes...
"We knew the world would not be the same. Few people laughed, few people cried, most people were silent. I remembered the line from the Hindu scripture, the Bhagavad Gita. Vishnu is trying to persuade the Prince that he should do his duty and to impress him takes on his multi-armed form and says, "Now I am become Death, the destroyer of worlds." I suppose we all thought that, one way or another."
— J. Robert Oppenheimer, looking back on the first nuclear bomb test
Advertisement:

The use of atomic bombs in fiction started as soon as the possibilities of splitting the atom became known — H. G. Wells first used the term in fiction in 1914, three decades before their invention.note Wells also predicted the submarine-launched ballistic missile and its strategic implications in 1933's The Shape of Things to Come.

When the Atomic Bombings of Hiroshima and Nagasaki showed just what effect they had, they became an integral part of culture.

Credit should be given to nukes for being the only weapons that, after their initial use, were so frightening that humanity has done everything it could not to use them again. That still doesn't change the fact that nukes are awesome. Until one, hopefully not, goes off above your head, or just in close proximity to it. And even then it's pretty awesome … for somebody else witnessing from outside the fireball and blast radius. You, on the other hand, will be vaporized faster than any neural signals could travel to the brain, let alone be processed into actual perception, and will cease to exist without ever knowing that anything happened at all. And that's not even mentioning radioactive fallout, which can spread for many, many miles following the explosion, and can kill many more people through radiation poisoning.

Just remember the First Rule of Nuclear Weapons: "What is the one and only way you can avoid being killed by a nuclear explosion? Don't be there when it goes off."

This is about them in both fact and in fiction.