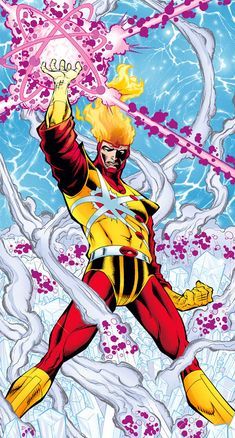 The power of the atom.
"My name is Captain Atom. As in A-bomb...as in nuclear fission...as in...the end of the world."
— Nathaniel Adam, Captain Atom: Armageddon #1
Advertisement:

When nuclear radiation isn't just the source of your strength, it is your strength. Characters with Atomic Superpower have their powers themed around various atomic phenomena such as radiation, nuclear energy, or quantum mechanics. Abilities such as these tend to be incredibly powerful and may be wielded recklessly.

Compare I Love Nuclear Power, for when nuclear radiation is simply the source of one's powers— the two can overlap, but often don't. This is not to be confused with a powerful country with nuclear weapons.