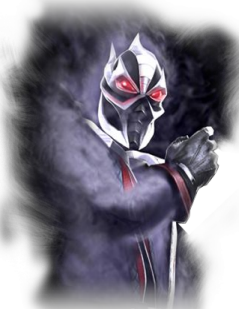 He doesn't even need the fire where he's going.
"When in mist form, I am invulnerable to physical weapons, blade and claw. I can seep through locked doors and cracks and move swiftly, like a shadow fleeing light."
— Kain, Blood Omen: Legacy of Kain

The power of a creature to turn into smoke. This is a form of Voluntary Shapeshifting, where the subject doesn't just change shape but can turn intangible — in the form of smoke, mist, or gas — while still retaining some coherence and control over the now cloudy body.

This power may have various applications. The most common is invulnerability to most physical attacks. It also allows slipping into tiny cracks to invade any place that isn't airtight. In some case, the cloud can gain very fast movement, maybe depending on the wind. The transformation can double as an attack if the gaseous form is also a Deadly Gas. Poison or no, villains with this power are not above forcing themselves down a victim's airway. It will also probably make the creature invisible if within any cloud or bank of similar-looking smoke or mist.

Turning into a cloud of mist is a standard power for vampires. Not every vampire story features this, however. It tended to be less prevalent in live-action, maybe due to the difficulty of rendering it well with special effects before CGI became the norm, or because it is less known than the classic bat or wolf shapes.

Not to be confused with Smoke Out, although it can sometimes look like it. For beings whose only form is smoke, see Fog of Doom.

A subtrope of Elemental Shapeshifter.