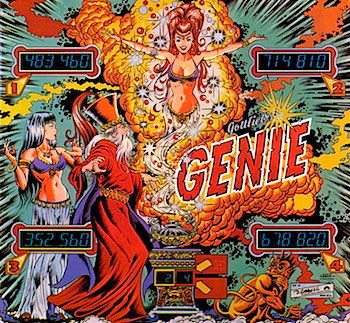 Genie is a pinball machine released in 1979. Designed by Ed Krynski with art by Gordon Morison, this was the first widebody pinball from Gottlieb.

As an early solid-state pinball, Genie is all about building up your score and collecting a huge bonus. Use the three lower flippers to get the bonus up to 20,000 points, then enter the mini-playfield and complete the red drop targets to light the Special. Get the white targets to increase the score values and enable the Extra Ball, hit the Spinner when lit before it goes out, then activate the ball trap and collect the full bonus without draining the ball.

Genie is considered by many to be one of the best widebody pinballs of all-time, and a true Gottlieb classic. It’s a great representation of early solid-state pinball design, with a single-minded focus on increasing the bonus value. Although the goals are fairly basic and the pace is not overly fast, the game itself is extremely hard, and the numerous scoring opportunities and subtle rule nuances keep players on their toes. Though it has a few detractors, one thing everyone agrees on is that this is an attractive game, with bright warm colors and a beautifully iconic backglass.

Digital versions of Genie are available on both Pinball Hall of Fame: The Gottlieb Collection and The Pinball Arcade.