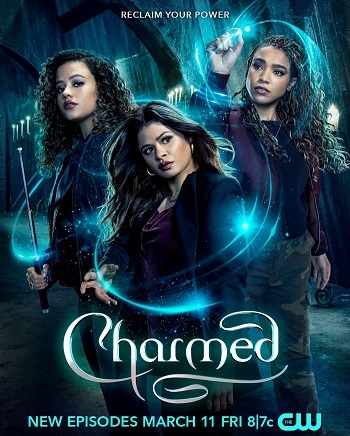 Nothing is stronger than your sisterhood.
Advertisement:

Charmed is a 2018 fantasy drama series developed by Jennie Snyder Urman airing on The CW, based on the 90s series of the same name created by Constance M Burge.

Sisters Mel (Melonie Diaz) and Maggie Vera (Sarah Jeffery) have been estranged since the mysterious death of their mother, Marisol, three months before. The two separately attend Hilltown University, where Mel is a graduate student while Maggie is a freshman. One day, they are approached by Macy Vaughn (Madeleine Mantock), a new scientist at the university lab, who introduces herself as their long-lost older sister. Subsequently, the three learn from Harry Greenwood (Rupert Evans), the head of Mel's department, that they are actually the most recent generation in a long line of witches; their powers were previously bound by a spell, which Marisol removed before she was killed. Harry himself is a Whitelighter, their guardian angel.

Initially apprehensive, the Veras soon learn that Harry was telling the truth, after Macy and Maggie exorcise a demon possessing Maggie's ex-boyfriend. Together with Mel, they defeat a demon disguising himself as Macy's superior. The sisters begin training under Harry's guidance as the Charmed Ones, protectors of the innocents against dark beings, while continuing to investigate their mother's death.

The cast also includes Galvin Burdette (Ser'Darius Blain), Macy's fellow scientist and love interest; Niko Hamada (Ellen Tamaki), a Hilltown detective and Mel's girlfriend; and Parker Caine (Nick Hargrove), a half-demon sent to get close with the Veras for a sinister purpose. The second season adds Jordan Chase (Jordan Donica), a boxer and the cursed descendant of a family of witchfinders; and Abigael Jameson-Caine (Poppy Drayton), Parker's sister who has ambitions to rule over demons.

In a case of History Repeats, on July 19, 2021, Mantock announced her departure from the series after Season 3

, mirroring Shannen Doherty's own departure from the original show after Season 3. Coincidentally, Doherty also played the eldest sister, much like Mantock. In her place, a new Charmed One, Michaela "Kaela" Danso, was introduced in Season 4, played by Lucy Barrett.