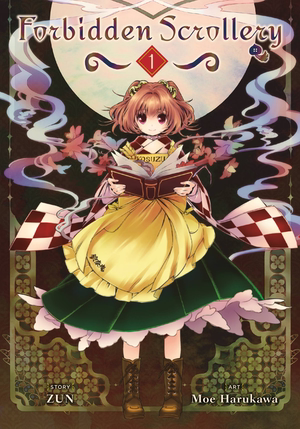 "Everyone, when they're children, has a tendency to think there is only one truth behind everything. They think that, in the same way parents and teachers will answer their questions, if there's anything they don't know the answer to, the truth is hidden somewhere, and if they look for it, they are sure to find it. But you see, that is a misconception brought about by humans designed to think that the world is finite. [...] The fact that the world is made up of the infinite means that there are an infinite number of truths."
— Hieda no Akyuu, chapter 48
Advertisement:

In addition to the main Touhou Project video game series, there are a number of canon Spin Offs including comics and other print materials. Touhou Suzunaan ~ Forbidden Scrollery is the fourth manga entry in the Touhou Project franchise, with strong ties to the games Hopeless Masquerade and Double Dealing Character. Continuing the progression from Wild and Horned Hermit, it is a full-fledged Mystery of the Week story, with each mini-incident split across two chapters. The manga was serialized monthly in Comp Ace from 2012 to 2017, for a total of 53 chapters compiled into 7 volumes.

Kosuzu Motoori is the young daughter of the owner of Suzunaan, the Human Village's book rental shop. A massive bibliophile who has recently developed the magical ability to read any language, Kosuzu has begun secretly delving into the shop's stock of Youma Books - books which were written by youkai... or sometimes are youkai. While this often has negative consequences, Kosuzu finds the experience too thrilling to stop, particularly since she's confident that Reimu can defeat anything that gets out.

An official English translation of Volume 1 was released in November 2017 by Yen Press, with subsequent volumes following.