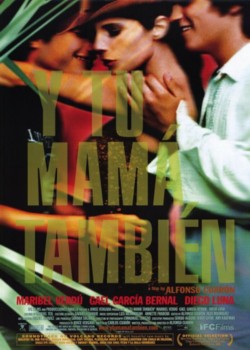 A 2001 movie by Mexican director Alfonso Cuarón (of Gravity and Harry Potter fame) which also launched the careers of actors Gael García Bernal (The Motorcycle Diaries, Mozart in the Jungle) and Diego Luna (Rogue One). The title means, (more or less), "And yo momma too." Two boys go on a trip to find a beach called Heaven's Mouth. Yeah, it's a wild goose chase, but they're really going to have sex with a beautiful woman.