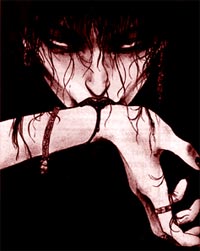 Are you afraid yet? You should be.
A Storytelling Game of Personal Horror.
Advertisement:

The tabletop roleplaying game that started the Old World of Darkness line. White Wolf, the game's publishers, subverted many tropes of roleplaying games from the late 80s by making the player characters monsters (as opposed to heroes who hunt them) and installing a Karma Meter that makes violence a dubious solution in many situations. In this game, players take the roles of vampires (aka the Kindred, aka the Damned), undead beings gifted with eternal (un)life and superhuman power, but forced to endure compulsive bloodlust and the manipulations and predations of seemingly all-powerful elder vampires.

The game presents the players with a finicky moral puzzle: committing too many evil acts feeds the Enemy Within (the animalistic urge that vampires call the Beast), endangering your Karma Meter and threatening to transform you into an unthinking monster, but the nature of vampirism and vampire society makes being a saintly do-gooder not only difficult but dangerous, and in that precarious balancing act — "Monsters we are, lest monsters we become" — lies much of the challenge of the game.

Vampires are divided up into clans (loose "families" of related vampires with similar habits and traits), who in turn congregate in sects (broad — and warring — political parties of vampires who don't see eye-to-eye on a vampire's place in the world). The Camarilla, the status quo power holders of the setting who emphasize secrecy and indirect control of the human world, initially boast seven clans in their ranks: the rabble-rousing, independent minded Brujah; the aloof and wild Gangrel; the bugshit insane Malkavians; the disfigured and shadowy Nosferatu; the artsy and passionate Toreador; the magic-wielding Tremere; and the refined but power-hungry Ventrue.

At direct war with the Camarilla are the Sabbat, a sect of vampire anarchist religious fanatics who say to hell with hiding from humans. Oddly, there are only two clans wholly steeped in the Sabbat (with the rest of the ranks filled by outcasts from their parent clan): the wickedly stylish Lasombra and the cold, alien-minded Tzimisce. There are four clans who fancy themselves independent: the Banu Haqim, Middle Eastern vampire assassins; the Followers of Set, vice-peddling schemers from Egypt; the Giovanni, an inbred family of Italian vampire aristos; and the Ravnos, nomadic, illusionist thieves.

There are also endless numbers of Bloodlines (lesser "sub-clans" with only a few members) ranging from vampires who look like gargoyles to pacifist healer vampires to vampires who can kill you by singing (really). Also critical to the game is the concept of Generation: Older vampires with lower Generation scores (that is to say, more closely "related" to the mythical first vampire) are the status quo power structure, while younger, high-generation vampires (like the players) are the low-men on the totem pole. Critical to the game's mythology are the dreaded, mysterious Third Generation, vampires so ancient and powerful they may well be Eldritch Abominations.

Masquerade is famous both for the huge wealth of creative material it presents to players...and the stranglingly convoluted metaplot and Byzantine internal contradictions that's made it a bit of a mess much of the time. Chicago By Night stands out as by far the most iconic of the game's supplements. In the early 2000s, White Wolf canned Masquerade (along with all their other World of Darkness games), replacing it with the very similar but more streamlined and thematically broad Vampire: The Requiem, but the old game was resurrected in a 20th anniversary edition in 2011, published first by White Wolf, then by Onyx Path Publishing.

By Night Studios put out a new edition of the game's LARP version in 2013 under the title Mind's Eye Theatre: Vampire The Masquerade, following its own metaplot.

A new edition of Masquerade was announced by Onyx Path at GenCon 2015, following on from where the original run had left off at cancellation, treating the anniversary edition as a "nostalgia edition" that commemorated Masquerade's previous history. However, that got dropped when Paradox Interactive bought White Wolf later in 2015 and announced Vampire: The Masquerade 5th Edition, which was released a few years later in 2018.

It also has a number of official Web Video playthroughs: